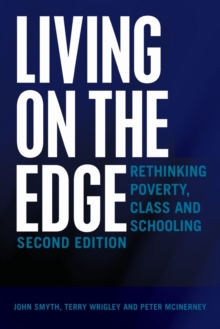 Living on the Edge: Rethinking Poverty, Class and Schooling, Second Edition confronts one of the most enduring and controversial issues in education-the nexus between poverty and underachievement.

This topic stubbornly remains a key contemporary battleground in the struggle to raise standards.

Living on the Edge maps and compares a number of competing explanations, critiques inadequate and deficit accounts and offers a more convincing and useful theory.

The authors challenge the view that problems can be fixed by discrete initiatives, which in many instances are deeply rooted in deficit views of youth, families and communities.

The book systematically interrogates a range of explanations based outside as well as inside schools.

It draws upon positive examples of schools which are succeeding in engaging marginalized young people, providing worthwhile forms of learning and improving young lives.

This second edition contains two expansive case studies that exemplify, explain and illustrate the themes coursing through the book.

Living on the Edge's second edition remains a "must read" for anyone concerned about or implicated in the struggle for more socially just forms of education.