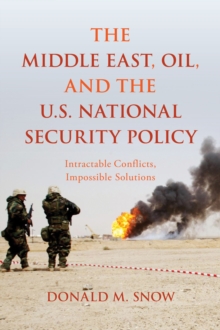 Three interrelated subject areas are at the heart of the current foreign and national security dilemma.

One is the Middle East, which has been the epicenter of most U.S. policy activity for over a third of a century. The second is energy policy, particularly as it is affected by the development and exploitation of shale oil and gas reserves in the United States.

This is linked to the Middle East because it has been American dependence on Middle East petroleum that has created the interest the U.S. has in this region. The third area is military manpower policy and two simultaneous wars in the new century have raised questions about the all-volunteer force policy in place since 1972.

It is increasingly evident that foreign and defense policy are strained and in need of fresh conceptualization.

The three areas identified are the most obvious examples of policy dysfunction.

The key area is the Middle East region. As long as the United States remains heavily committed to this part of the world, especially with military force and essentially because of its energy needs, there will be strains on manpower resources that could force a reexamination of the all-volunteer concept.

At the same time, the reduction of U.S. dependence on Middle Eastern oil loosens the bonds that seem to impel American activism in the region.

The result could be true opportunities for a less confrontational, adversary-driven foreign and defense posture.