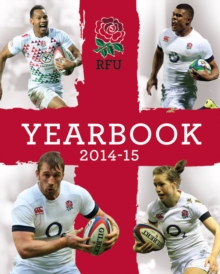 England Rugby has every reason to be excited about 2015.

As hosts of the IRB Rugby World Cup and blessed with a team that has been getting better and better for the past couple of years, this could be the year that they emulate the 2003 squad and win the Webb Ellis Trophy.

The England Rugby Yearbook 2014/15 doesn't just look forward to the RWC, it mainly looks back at the successful year just gone.

A narrow loss in the RBS Six Nations Championship - arguably lost in 15 minutes in Paris - was followed by the eye-opening tour to New Zealand, when the World Champions had more than than their hands full against a team some way short of full strength.

Then came the QBE Autumn Internationals when the World Cup credentials were strenghtened further.

In fact, however, England's men are now merely trying to emulate the World Cup-winning Women's team which triumphed in 2014.

This and their Six Nations Triple Crown are featured as are the men's Under-20s, Sevens and Saxons team. All this, plus an exhaustive statistics section, including biographies of the men's and women's players of the year in 2014, and 160 stunning full-colour photographs make The England Rugby Yearbook 2014/15 required reading for every England Rugby fan.