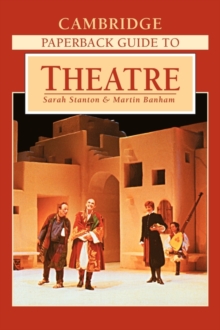 This Guide is a concise reference to the theatre of the world, with entries on playwrights, actors, directors, critics and entertainers; on theatres, organizations and companies; on traditions, styles and genres of performance.

Entries extend back to Sanskrit drama and the theatre of ancient Greece as well as encompassing contemporary practitioners.

The emphasis is on performance in its broad sense, including popular entertainment as well as scripted drama, with entries on circus, musical theatre and pantomime, on male and female impersonation, gay and lesbian theatre, as well as Indian festival and Japanese puppet theatre, and the classic and contemporary theatre of Europe and North America.

Four contextual essays provide the reader with the background to the great theatre traditions of Asia, Africa, South America and the Middle East.

This book not only reflects the diversity and authoritativeness of the parent Cambridge Guide to Theatre, but also offers an accessible compactness.