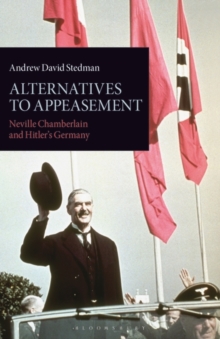 However, both historians and politicians have been divided about the viability of alternative courses of action. Andrew David Stedman's illuminating new study of British foreign policy before the Second World War systematically analyses the various alternatives to appeasement, from isolationism to collective security to outright war, and examines their origins, risks and feasibility.

It surveys the advocates of other strategies, including key thinkers and decision-makers such as Churchill, Eden, Amery, Beaverbrook and Halifax, and outlines the complexities of the decisions they faced - a subject that has previously been largely overlooked. Marking a valuable new contribution to appeasement historiography, this is the first work to synthesise all the alternatives available to Chamberlain and outline policy debate within the British government.

Stedman provides a vigorous analysis of Chamberlain's assessment of each rival policy and shows why he ultimately opted for a policy of appeasement.

Contributing to debates on the use of appeasement in the modern world, this book will be essential reading for historians of World War II and the twentieth century, as well as scholars of International Relations.