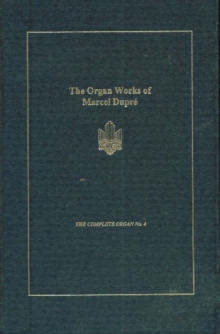 The Organ Works of Marcel Dupre

Marcel Dupre's career as an organist spanned the first seven decades of the 20th century, and took him all over Europe, North America, and Australasia.

He delighted vastaudiences wherever he played, and attracted large numbers of enthusiastic students, for whom his church of St.

Sulpice in Paris and his home at Meudon were their musical Mecca.

Dupre had a profound influence on a host of musicians who sought his guidance, and as a composer for the organ his place in the historical line of J.S.

Graham Steed is recognized for his skilled and musicianly advocacy of Dupre's compositions and he brings a keen and discerning intelligence to his analyses.