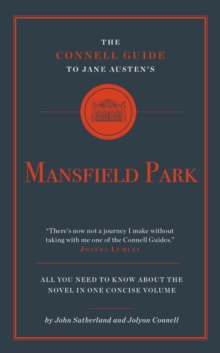 It has been fiercely argued over for more than 200 years, and with good reason: it is open to radically different interpretations.

At its broadest, it is a novel about the condition of England, setting up an opposition, as the Austen biographer Claire Tomalin has put it, between someone with strongly held religious and moral principles who will not consider a marriage that is not based on true feeling, and is revolted by sexual immorality, and "a group of worldly, highly cultivated, entertaining and well-to-do young people who pursue pleasure without regard for religious or moral principles".

Many have dismissed the heroine, Fanny Price, as a mere picture of goodness, but the author of this guide, John Wiltshire, one of the most respected and original of modern Austen critics, dismisses this argument. "The still, principled fulcrum of moral right, celebrated and excoriated by earlier critics," he says, is now "understood to be a trembling, unstable entity", an "erotically driven and conflicted figure".

Indeed, in part at least, this is a novel about female desire - the plot revolves around the passionate feelings of two young women, Fanny and Maria.

The argument that it is a straightforward defence of the conservative way of life is hard to sustain; it is more plausibly seen as questioning the whole patriarchal basis of society, and in particular the extent to which women were trapped by a system over which they had no control.

Far from being devoid of irony, it is now frequently, and perhaps rightly, thought of as the most ironic of all Austen's novels.