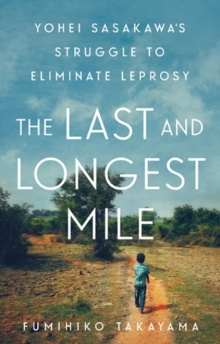 This book offers a compelling account of the two-pronged fight against both leprosy and the discrimination that comes with it.

Leprosy is generally weak against the immune system, yet it persists in populations with inadequate nutrition and weak resistance, due to poverty or lack of disease control measures.

Thus the battle against leprosy has involved a highly effective multidrug therapy, and getting it to communities in need. 'The Last and Longest Mile' tells the story of the WHO's offering of this cure, free of charge across the world, in 1995-9, through vital funding from the Nippon Foundation; and of how the Foundation has continued pursuing elimination of leprosy in the years since.

Yohei Sasakawa, the organisation's chairman, has personally travelled the world to lead the struggle against the disease, and particularly to combat discrimination against leprosy patients or ex-patients and their families--an effort that has lagged behind the campaign to eradicate the disease itself. Award-winning writer Fumihiko Takayama accompanied Sasakawa on his seven-year global crusade from 2009.

Here he recounts the milestones of their journey, explores the important advances and setbacks experienced along the way, and reveals the personal sense of mission that drives the tireless Yohei Sasakawa.