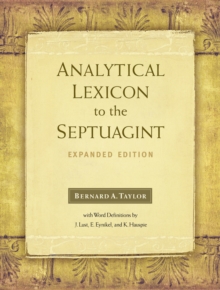 Analytical lexicon to the Septuagint

The Septuagint - the ancient Greek translation of the Hebrew Bible - was an influential translation for Jews and Christians of the first century.

When the New Testament writers quoted the Old Testament, they most often used the Septuagint (abbreviated LXX) translation.

Thus the vocabulary and thought forms of the LXX had a significant impact on the development of New Testament theology.

Although the LXX and the New Testament were both written in Koine Greek, much of their vocabulary and word forms are different.

Thus students and scholars who desire to read the LXX need a reliable reference guide that will help them decode the host of word forms and meanings that go beyond New Testament Greek.

The Analytical Lexicon to the Septuagint lists alphabetically every Greek word form found in the standard Rahlfs LXX text, along with a detailed parsing of each form.

Besides correcting errors found in the previous (1994) edition, this expanded edition also includes basic glosses (definitions) for each Greek word from Greek-English Lexicon of the Septuagint, compiled by Johan Lust, Erik Eynikel, and Katrin Hauspie. These glosses are translation equivalents rather than technical definitions, and provide literal meanings as well as metaphorical ones.

In many cases, the glosses are accompanied by grammatical and contextual information that sheds additional light on the word's meaning.

The combination of the exhaustive grammatical analysis of the Analytical Lexicon and the helpful glosses of the Greek-English Lexicon make this expanded edition an indispensible tool for everyone engaged in the study of the Septuagint.