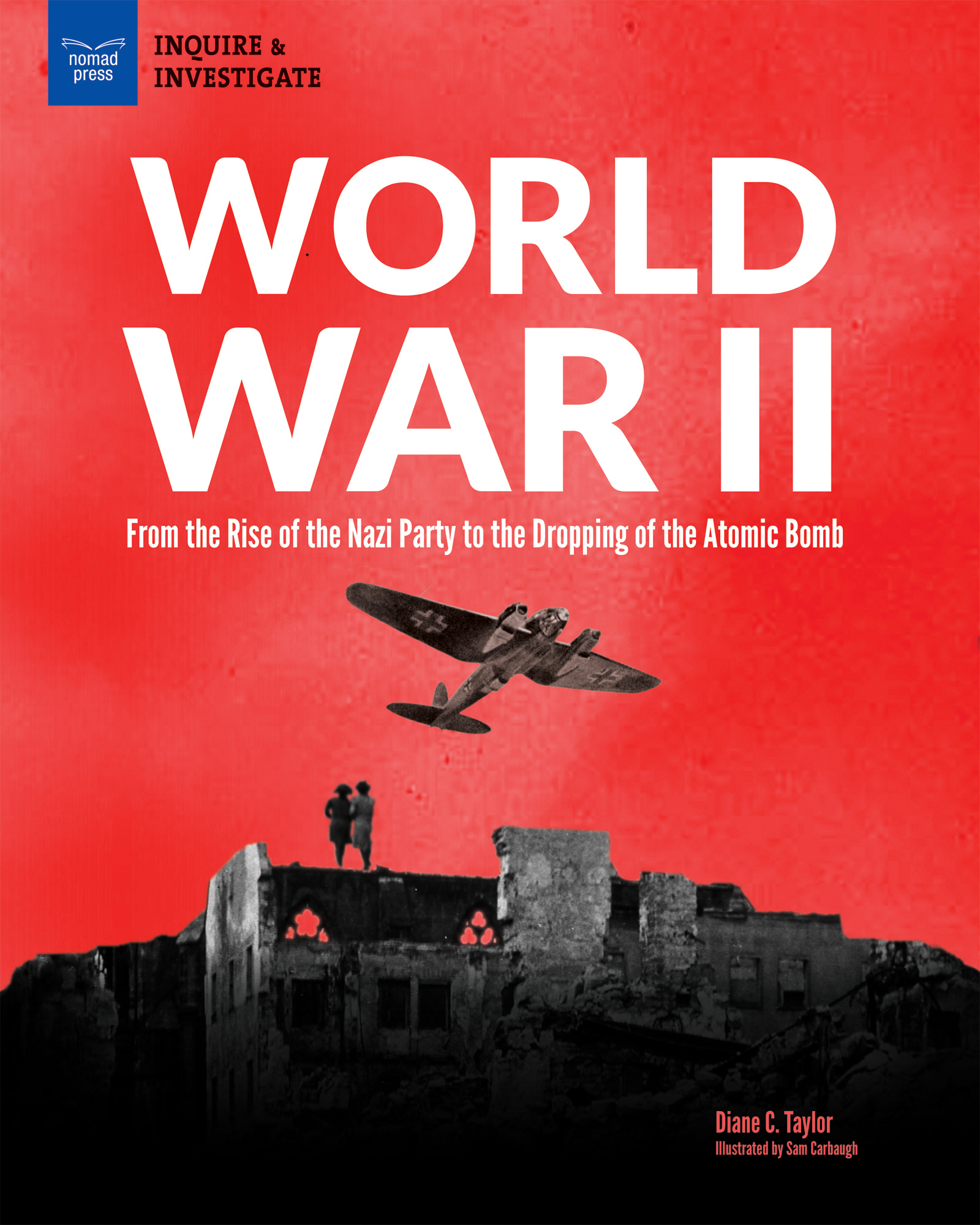 World War II : from the rise of the Nazi party to the dropping of the atomic bomb

By: Taylor, Diane,  Carbaugh, Samuel(Illustrated by)

Part of the Inquire and investigate series series

Why did the world find itself immersed in another global conflict only two decades after World War I?World War II: From the Rise of the Nazi Party to the Dropping of the Atomic Bomb introduces kids ages 12 to 15 to the political, military, and cultural forces that shook the globe from 1939 to 1945 and beyond.

Germany suffered terribly after World War I, due to the harsh repercussions imposed on the country with the 1919 Treaty of Versailles.

Hitler and the Nazi party, with their extremist views on racial superiority and their eagerness to erase certain ethnicities and cultures through systemic murder, found a country ready to rise up and conquer weaker nations.

Totalitarianism wasn't limited to Germany, however. The Axis countries of Italy and Japan also saw opportunities to overcome surrounding nations.

The early events of the 1940s convinced the Allied countries of France, Britain, Russia, and the United States to join forces against the aggressor nations. World War II invites middle school students to examine the events leading up to, during, and after WWII and the repercussions of these events on populations around the world.

Readers learn about Germany's invasion of Poland and the resulting domino fall of events that engaged several countries and eventually caused the deaths of 60 million people, including 40 million civilians.

They also see how the dark side of Hitler's ideology was always present, eventually resulting in the Holocaust, the systematic murder of 11 million people, including 6 million Jews and other populations. Through primary sources, essential questions, and engaging text, readers gain a comprehensive understanding of the politics, the economics, the strategy, and the human experience of this global conflict.

They also work to find comparisons and parallels between the world as it was before and during WWII and as it is now.

Investigative activities, including deconstructing patriotic songs of the era and examining maps of Europe, Asia, and Africa during different time periods serve as jumping-off points for further critical thinking and explorative inquiry as kids delve into the legacy of World War II.

What did the world learn from World War II? Could World War II ever happen again?World War II is one book in a set of four that explore great events of the twentieth century. Inquire and Investigate titles in this set include The Vietnam War; World War II: From the Rise of the Nazi Party to the Dropping of the Atomic Bomb; Globalization: Why We Care About Faraway Events; and The Space Race: How the Cold War Put Humans on the Moon. Nomad Press books in the Inquire & Investigate series integrate content with participation, encouraging older readers to engage in student-directed learning as opposed to teacher-guided instruction.

This student-centered approach provides readers with the tools they need to become inquiry-based learners.

Combining content with inquiry-based projects stimulates learning and makes it active and alive.

Consistent with our other series, all of the activities in the books in the Inquire & Investigate series are hands-on, challenging readers to develop and test their own hypotheses, ask their own questions, and formulate their own solutions.

In the process, readers learn how to analyze, evaluate, and present the data they collect.

As informational texts our books provide key ideas and details from which readers can work out their own inferences.

Nomad's unique approach simultaneously grounds kids in factual knowledge while allowing them the space to be curious, creative, and critical thinkers.