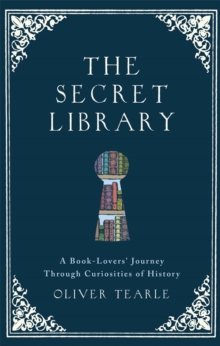 The secret library : a book-lovers' journey through curiosities of history

A fascinating tour through the curious history of Western civilization told through its most emblematic invention - the book.

As well as leafing through the well-known titles that have helped shape the world in which we live, Oliver Tearle also dusts off some of the more neglected items to be found hidden among the bookshelves of the past.

You'll learn about the forgotten Victorian novelist who outsold Dickens, the woman who became the first published poet in America and the eccentric traveller who introduced the table-fork to England.

Through exploring a variety of books - novels, plays, travel books, science books, cookbooks, joke books and sports almanacs - The Secret Library highlights some of the most fascinating aspects of our history.

It also reveals the surprising connections between various works and historical figures.

What links Homer's Iliad to Aesop's Fables? Or Wisden Cricketers' Almanack to the creator of Sherlock Holmes?

The Secret Library brings these little-known stories to light, exploring the intersections between books of all kinds and the history of the Western world over 3,000 years.