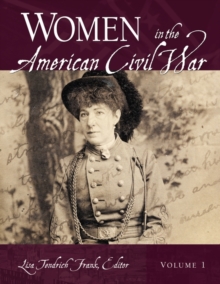 Women in the American Civil War : an encyclopedia

This fascinating work tells the untold story of the role of women in the Civil War, from battlefield to home front.

Except for those named Harriet - Tubman and Beecher Stowe, to be precise - women are invisible in Civil War history.

The traditional treatment focuses on the men who directed and fought the war.

This encyclopedia lifts the curtain on the untold stories of women as warriors, spies, fundraisers, and propagandists - the whole range of war-related activity.

Most Americans can name famous generals and notable battles from the Civil War.

With rare exception, they know neither the women of that war nor their part in it.

Yet, as this encyclopedia demonstrates, women played a critical role.

The book's 400 A-Z entries focus on specific people, organizations, issues, and battles, and a dozen contextual essays provide detailed information about the social, political, and family issues that shaped women's lives during the Civil War era. "Women in the American Civil War" satisfies a growing interest in this topic.

Readers will learn how the Civil War became a vehicle for expanding the role of women in society. Representing the work of more than 100 scholars, this book treats in depth all aspects of the previously untold story of women in the Civil War.