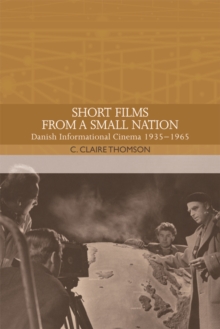 Part of the Traditions in world cinema series

Dreyer. The first book-length study in English of a national corpus of state-sponsored informational film, this book traces how Danish shorts on topics including social welfare, industry, art and architecture were commissioned, funded, produced and reviewed from the inter-war period to the 1960s.

Examining the life cycle of a representative selection of films, and discussing their preservation and mediation in the digital age, this book presents a detailed case study of how informational cinema is shaped by, and indeed shapes, its cultural, political and technological contexts.Key featuresCombines close textual analysis of a broad range of films with detailed accounts of their commissioning, production, distribution and reception in Denmark and abroadConsiders a broad range of genres and sub-genres, including industrial process films, public information films, art films, the city symphony, the essay film, and many moreMaps international networks of informational and documentary films in the post-war periodExplores the role of informational film in Danish cultural and political history