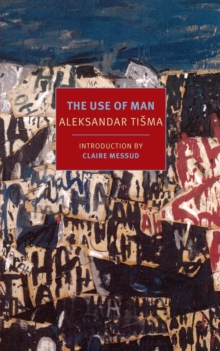 The use of man

The Use of Man starts with an unexpected discovery.

World War II is ending. Sredoje Lazukic has been fighting all through it. Now, as one of the victorious Partisans, he has come home to Novi Sad.

He visits the house he grew up in. Strangers nervously show him around. He looks up the mother of Milinko, his best friend. Milinko's girlfriend, Vera, was the daughter of a Jew, a bookish businessman.

Her house stands empty and open. Venturing in, Sredoje is surprised to find the diary of the German tutor that Milinko, Vera, and he all shared, Fraulein, who died on the operating table just before the war.

Here, however, in a cheap notebook in Vera's old room, is a record of Fraulein's lonely days, with the sentimental caption Poesie...The diary survived.

Sredoje survived. Vera and Milinko have survived too. But what survives? A few years back Sredoje, Vera, and Milinko were teenagers, struggling to make sense of life.

Life, they now know, can be more bitter than death. A work of stark poetry and illimitable sadness, The Use of Man is one of the great books of the 20th century.