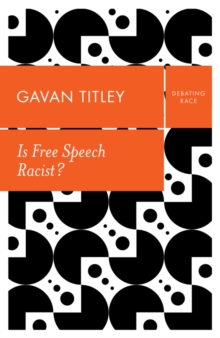 Part of the Debating Race series

The question of free speech is never far from the headlines and frequently declared to be in crisis.

Starting from the observation that such debates so often focus on what can and cannot be said in relation to race, Gavan Titley asks why racism has become so central to intense disputes about the status and remit of freedom of speech.

Is Free Speech Racist? moves away from recurring debates about the limits of speech to instead examine how the principle of free speech is marshalled in today's multicultural and intensively mediated societies.

This involves tracing the ways in which free speech has been mobilized in far-right politics, in the recycling of 'race realism' and other discredited forms of knowledge, and in the politics of immigration and integration.

Where there is intense political contestation and public confusion as to what constitutes racism and who gets to define it, 'free speech' has been adopted as a primary mechanism for amplifying and re-animating racist ideas and racializing claims.

As such, contemporary free speech discourse reveals much about the ongoing life of race and racism in contemporary society.