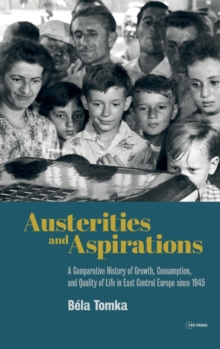 Austerities and Aspirations : A Comparative History of Growth, Consumption, and Quality of Life in East Central Europe Since 1945

By: Tomka, Bela (Bela Tomka Is Professor of History at Department of Contemporary History University of Szeged Hungary)

This monograph updates existing scholarship on the economic performance of Czechoslovakia, Hungary, and Poland since 1945, contrasting it to Western Europe.

For this longitudinal comparative exercise, the author goes beyond the traditional growth paradigm and analyzes the historical patterns of consumption and leisure, as well as quality of life, broadly understood, aspects that Tomka argues can best be analyzed in relation to one other.

By adopting this "triple approach", his analysis relies not only on economic history and economics, but also on the methods and results of sociology and demography.

Tomka's three pillar description shows that the pre-WWI period was the time when East Central Europe was closest to Western Europe.

The interwar period sustained this level. The book thus dispels the widespread myth of the communist era as one of catching up and convergence.

Beyond providing useful quantitative information, the author provides insight on the scholarly debates ranging from the factors of growth to demographic developments to the complexities of consumption in communist regimes.

The analysis finally demonstrates that the post-communist transition, despite its high social and economic costs, allowed for qualitative and quantitative convergence, stalled only by the financial crisis of 2008.