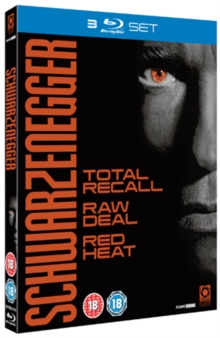 In 'Raw Deal' (1986), former FBI agent Mark Kaminsky (Schwarzenegger) was forced to leave the Bureau due to his excessive brutality.

He agrees to take on a job as Patrovita's bodyguard, and destroy the mob from within.

In 'Red Heat' (1988), Moscow policeman Captain Ivan 'Iron Jaws' Danko (Schwarzenegger) is on the trail of Russian drug dealer Viktor Rostavilli (Ed O'Ross) in the USA when he is ambushed by the dealer's gang.

When Rostavilli makes his escape, an American cop is killed.

Danko teams up with the dead cop's partner (James Belushi) in a bid to complete his mission, but the resulting culture clash between East and West causes various hilarious problems.

In 'Total Recall' (1990), Doug Quaid (Schwarzenegger), a happily married construction worker living in the year 2084, is haunted by a recurrent dream in which he is living with a woman on Mars.

Rekall Incorporated offer him the chance to live out his dream through a microchip which implants any memories their client desires into their brain.

But something goes wrong during the installation of Quaid's memories of a trip to Mars and soon he lands up on the planet for real, unsure of his true identity and pursued by a gang out for his blood.

He teams up with a group of resistance fighters to uncover a mystery which leads to the highest echelons of the planet's government.