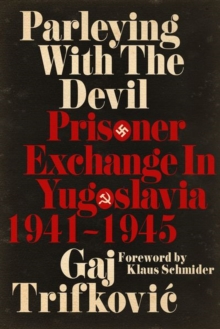 Parleying with the Devil : Prisoner Exchange in Yugoslavia, 1941-1945

Part of the New Perspectives on the Second World War series

The Second World War in Yugoslavia is notorious for the brutal struggle between the armed forces of the Third Reich and the communist-led Partisans.

Less known is the fact that the two sides negotiated prisoner exchanges throughout the war.

Under extraordinary circumstances, these early communications evolved into a formal exchange agreement centered on the creation of a neutral zone - quite possibly the only such area in occupied Europe - where prisoners were regularly exchanged until late April 1945, saving thousands of lives.

The leadership on both sides used these points of contact to hold secret political talks, for which they were nearly branded as traitors by their superiors in Berlin and Moscow. Parleying with the Devil is the first comprehensive analysis of prisoner exchanges and the attendant contacts between the German occupation authorities and the Yugoslav Partisans.

Trifkovic argues that prisoner exchange had a decisive influence on prisoner of war policies on both sides and helped reduce the levels of violence for which this theater of war became infamous.

Parleying with the Devil reveals that these points of contact, contrary to some claims, did not lead to collusion between these two parties against other Yugoslav factions or the Western Allies.