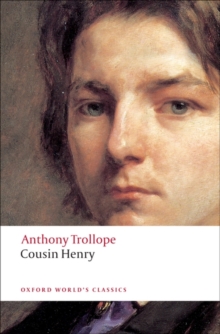 By: Trollope, Anthony,  Thompson, Julian(Edited by)

Henry Jones, an unprepossessing London insurance clerk, knows that his uncle has disinherited him. The old man's will, made out at the last minute in favour of Henry's charming cousin Isabel Brodrick, lies neatly folded in a well-thumbed volume of sermons in his book-room; Henry saw him put it there before he died. Unfortunately nobody else knows where the will is, and Henry stands to lose everything by making the knowledge public.

Cousin Henry, first published in 1879, is one of the most unusual and intriguing of Trollope's shorter novels and its unlikely hero is a timid coward consumed by guilt. But Trollope's handling of his character and dilemma is masterly in its insight and compassion; he knew he had nothing quite like it elsewhere in his fiction.