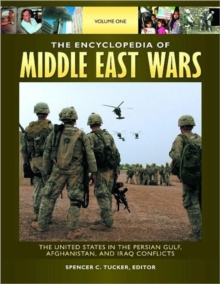 The Encyclopedia of Middle East Wars [5 volumes] : The United States in the Persian Gulf, Afghanistan, and Iraq Conflicts

By: Tucker, Spencer C.(Edited by)

This in-depth study of U.S. involvement in the modern Middle East carefully weighs the interplay of domestic, cultural, religious, diplomatic, international, and military events in one of the world's most troubled regions. The monumental, five-volume The Encyclopedia of Middle East Wars: The United States in the Persian Gulf, Afghanistan, and Iraq Conflicts is a must-have resource for anyone seeking to comprehend U.S. actions in this volatile region. Under the expert editorship of Spencer C. Tucker, the encyclopedia traces 20th- and 21st-century U.S. involvement in the Middle East and south-central Asia, concentrating on the last three decades.

Beginning with the 1980-1988 Iran-Iraq War, it covers the 1979-1989 Soviet occupation of Afghanistan, the 1991 Persian Gulf War, allied punitive actions against Iraq during the 1990s, the Afghanistan War, the Iraq War, and the Global War on Terror.

Many smaller military actions against Iran, Iraq, Libya, Afghanistan, and other regimes that have been involved in international terrorism are also included.

Diplomacy, religion as it pertains to Middle East conflict, and social/cultural developments are other key subjects of analysis, as is the interplay of politics with military policy in the United States and other nations involved in the region. Hundreds of alphabetically organized entries on wars, political events, religious and cultural issues, and diplomatic initiatives, as well as in-depth essays on background material, area and regional analyses, and biographical entriesAn introduction by General Anthony Zinni, USMC (Ret), former commander in chief of U.S.