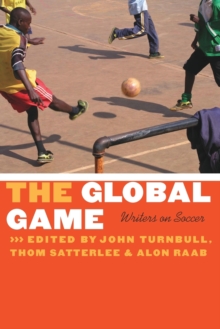 The global game : writers on soccer

Includes "The Empty Pleasure" by 2010 Nobel Prize in Literature Winner Mario Vargas Llosa The world's most popular sport, soccer, is also one of the planet's prevalent cultural expressions, celebrated and debated as an art form, observed with ritual and passion.

Thus it has inspired literary efforts of every sort, from every corner of the globe, by women and men.

The writings gathered in this volume reflect the universal and infinitely varied ways in which soccer connects with human experience.

Poetry and prose from Ted Hughes, Charles Simic, Eduardo Galeano, Gunter Grass, Giovanna Pollarolo, Mario Vargas Llosa, and Elvis Costello-to name but a few-take us to a dizzying array of cultures and climes.

From a patch of ground in Missoula, Montana, to a clearing in a Kosovo forest, from the stadiums of Burma and Iran to the northern lights over Greenland to remotest Sierra Leone, these writers show us soccer's stars and fans, politics and rituals, as well as the game's power to encourage resistance, inspire faith, and build community.