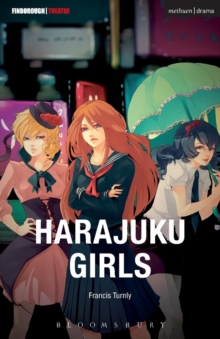 I don't know a girl who hasn't been groped on a train.

There's always someone trying to cop a feel. Might as well get paid for it. On Jingu Bridge in Tokyo, teenage girls dress in cosplay outfits for fun, fashion, and the fantasy of being someone else, but for Mari, Keiko and Yumi, their schooldays are over... In a race to escape from overbearing parents, stifling dead-end jobs and economic deprivation, they find their way to Kabukicho, a district of panty shops, love hotels and image clubs, where every aspect of the body and soul can be bought and sold.

Only they can decide how far they're willing to go. As the three young women grow up and apart, they tread a dangerously fine line between empowerment and victimhood as they struggle to pursue their dreams, despite the obstacles that society and tradition put in their way. A fascinating and ambitious play about adolescence, independence and sexuality set in the colourful, fascinating world of Japanese cosplay and style, Harajuku Girls premiered at the Finborough Theatre, London, in February 2015.