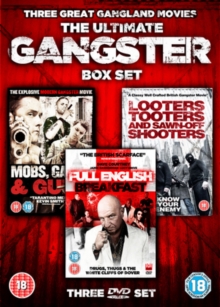 He seeks revenge on the friend who betrayed him and hopes to be reunited with the woman he loves, Bella (Cassandra Petrella).

When Bella is kidnapped, however, he becomes determined to get her back, no matter what it takes. 'Looters Tooters and Sawn-Off Shooters' (2014) follows ex-gangster Charlie Thompson (Steve Brunton) who, after learning of the tragic death of his young nephew Danny (Tommy Ivers), returns to his former turf to seek revenge and to protect the last surviving member of his family, nephew Frankie (Bert Truby).

When he finds out that Frankie blames him for Danny's death Charlie tries his best to set the record straight and get even on those who have wronged him.

Meanwhile, his wife Susan (Lucy Drive) gets involved with his new driver Jamie (Jamie Bannerman), who will suffer severe consequences if they are caught.