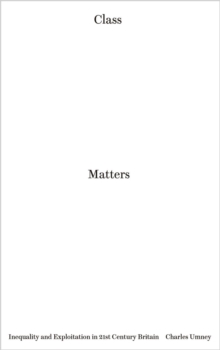 Social class remains a fundamental presence in British life in the twenty-first century.

It is woven into the very fabric of social and political discourse, undiminished by the end of mass industry; unaugmented despite the ascendancy of 'ordinary working people' and other substitute phrases.

Absent from this landscape, however, is any compelling Marxist expression or analysis of class. In Class Matters, Charles Umney brings Marxist analysis out of the 19th century textiles mill, and into the call centres, office blocks and fast food chains of modern Britain.

Providing a critical analysis of competing perspectives, Umney argues that class must be understood as a dynamic and exploitative process integral to capitalism - rather than a descriptive categorisation - in order for us to better understand the gains capital has made at the expense of labour over the last four decades.