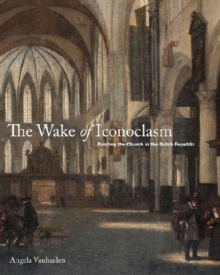 The wake of iconoclasm : painting the church in the Dutch republic

In describing the seventeenth-century Dutch Republic, Johan Huizinga said, "Paintings could be found everywhere . . . everywhere except in churches." Although pictures were ubiquitous in the Dutch world, the official religion expressed a fundamental distrust of visual imagery.

Indeed, Calvinism and visual culture were both central modes of self-understanding in Dutch society.

Investigating this paradox, The Wake of Iconoclasm takes as its main subject the numerous paintings of austere Calvinist church interiors that proliferated in the seventeenth century.

Painstakingly crafted and highly naturalistic images of interiors, these peculiar paintings show spaces that were purged of visual imagery during and after the iconoclast riots of the sixteenth century.

In essence, they depict the interface of the histories of art and religion.

Angela Vanhaelen argues that the main function of this imagery was to stimulate debate about the transformed role of art in relation to the religious and political upheavals of the Reformation and the Dutch Revolt.

Paintings of the emptied churches allowed their beholders to grapple with the significant public influence of Calvinism-especially its suppression of past cultural traditions and the new conditions of possibility it created for the visual arts.