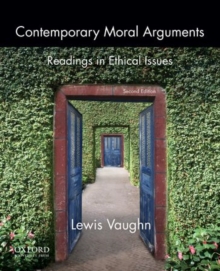 Taking a unique approach that emphasizes careful reasoning, this cutting-edge reader is structured around twenty-seven landmark arguments that have provoked heated debates on current ethical issues.

Contemporary Moral Arguments: Readings in Ethical Issues, Second Edition, opens with an extensive two-chapter introduction to moral reasoning and moral theories that provides students with the background necessary to analyze the arguments in the followingchapters.

Chapters 3-12 present seventy-six readings that are organized-in the conventional way-into ten topical areas: abortion; drugs and autonomy (new to this edition); euthanasia and assisted suicide; genetic engineering and cloning; the death penalty; war, terrorism, and torture; pornography; economic justiceand health care; animal rights and environmental duties; and global obligations to the poor. Offering a special feature not found in other anthologies, the selections are also organized in an unconventional way, by argument, so that students can more easily see how philosophers have debated each other on these critical issues.

Each argument opens with an introduction that outlines the argument's key points, provides context for it, and reviews some of the main responses to it.

Each introduction is followed by two to four essays that present the argument's classicstatement, critiques and defenses of it, and related debates. Contemporary Moral Arguments incorporates more pedagogical features than any other reader, including:* Essay questions-ideal for writing assignments-after each of the twenty-seven argument sections* Four types of boxes throughout: Facts and Figures, Public Opinion, Legalities, and Time Lines* A list of key terms at the end of each chapter, all defined in the glossary, and suggestions for further reading* An Instructor's Manual and Testbank on CD featuring chapter and reading summaries, lecture outlines in PowerPoint format, and essay and objective questions with an answer key* A Companion Website at www.oup.com/us/vaughn containing the same material as the Instructor's Manual along with such student resources as self-quizzes and flash cardsNEW TO THIS EDITION:* An expanded introductory chapter on moral reasoning that dissects a sample essay step by step and includes exercises on arguments* A new chapter (4) on drugs and autonomy, including four classic articles* A new section on ethical egoism (in Chapter 2) and three additional readings in other chapters* Numerous updated text boxes that reflect the latest information on abortion, euthanasia and assisted suicide, genetic engineering, capital punishment, war and terrorism, and economic and global justice