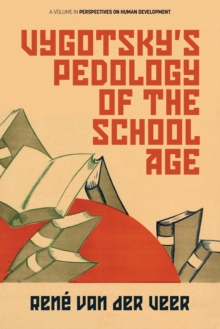 Vygotsky's Pedology of the School Age

Part of the Perspectives on human development series

This is an edited (introduced and annotated) book by the Russian psychologist Lev Vygotsky who belongs to the most well-known social scientists of the previous century and whose body of writings still serves as a source of inspiration for present-day researchers in psychology, education, linguistics, and so on.

The book had not been translated into any language and was virtually unknown to the scientific community, because it is extremely hard to find a copy of the original.

The book will cause excitement among those familiar with Vygotsky's writings, because it deals with an aspect of his life and work that is little known, notably his involvement with child studies or, as it is also known, pedology (paidology, paedology).

Child studies was a new discipline launched by the American G.

Stanley Hall which aimed to offer a comprehensive study of the child including psychological, educational, medical, and social aspects.

The discipline enjoyed a brief popularity in the US and Europe until WW 1 and continued its existence in the USSR until 1936 when it was forbidden.

The book gives a unique insight into Russian and Soviet pedology and will be interesting to anyone interested in developmental and general psychology, education, and the social history of these disciplines.

As the book requires virtually no previous knowledge it can be read with profit by both undergraduate and graduate students and professors.

An additional asset for those specifically interested in Vygotsky's theorizing is that it shows a whole new light on the social-historical and political background of his ideas.

The book is introduced by an essay that explains the historical embeddedness of Vygotsky's ideas and the footnotes and list of brief biographies of key figures make it particularly easy to understand the book's content and context.