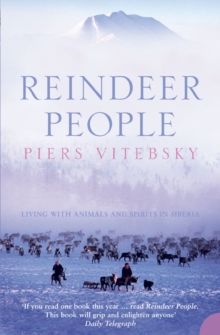 Reindeer people : living with animals and spirits in Siberia

A voyage of discovery into the life of a remote aboriginal community in the Siberian Arctic, where the reindeer has been a part of daily life since Palaeolithic times.

The reindeer, along with the dog, was probably the first species to be drawn into a close relationship with man.

This book, by an eminent British anthropologist, is the beautifully written story of how that relationship works and of the intimacy between the nomadic reindeer people and the landscape they inhabit.

What to the Western eye looks like a vast, uninhabited Arctic wilderness is in fact filled with animals, humans and spirits - and the memory-traces of their interactions down the ages.

No other Western author has had such access (since before the Cold War ended) to these distant regions of the Siberian taiga.

Living and travelling with the reindeer people over a period of a dozen years, Piers Vitebsky has seen how, first, Communism and collectivization threatened the way of life of the nomadic tribesmen, and then the marketplace continued to transform their existence.Through all the changes of the late twentieth century the reindeer has retained its central place in the physical and spiritual life of the people.

The book is also a celebration of human love at an elemental level.