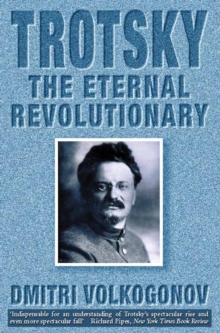 Together with Lenin, Trotsky was the most charismatic and dominating figure of the Russian revolution.

A dynamic public speaker, a brilliant organizer and theorist, he was largely responsible for advocating the system of state terror which was ultimately to lead to the nightmare of Stalinism.

This biography describes Trotsky's career as a revolutionary before World War I and his roles successively as chief organizer of the October revolution, military hero of the Russian civil war and outspoken critic of the Stalinst style of leadership. Widely regarded as Lenin's likely successor, Trotsky was outmanoeuvred by his enemy, Stalin and found himself expelled from the Communist Party, written out of the history of the revolution, exiled and finally murdered in Mexico by Stalin's agents. The author tracked down members of Stalin's overseas hit-squad and found relatives of Trotsky in Russia.

Combined with his access to Soviet archives, this biography lends insight into one of the most influential figures of the 20th century, whose faith in the world socialist revolution remained undimmed to the end.