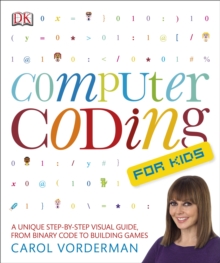 Python programming and Scratch are a doddle to learn with this easy and colourful guide to coding for kids.

Just follow the simple steps and you'll be writing programs in no time. With more than 250,000 copies sold worldwide, Computer Coding for Kids is perfect for beginners of all ages.

It starts with the Scratch programming language. Simple examples get readers up to speed quickly, explaining not only how Scratch works but also introducing universal coding concepts, such as loops, variables, strings, and Boolean logic.

The Scratch section includes several longer, worked examples of games that readers can build in minutes by following the simple numbered steps. The second part of the book covers the Python language, building on the principles learned in Scratch.

This section is ideal for readers who've mastered Scratch and are eager for new challenges.

The Python section includes several longer, step-by-step projects that allow readers to build and adapt their own games. Computer Coding for Kids is equally well suited to children who are new to programming and to those who are already interested and hungry to learn more.