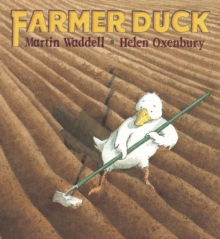 By: Waddell, Martin,  Oxenbury, Helen(Illustrated by)

"Farmer Duck" is an amusing fable. Martin Waddell's awards include the Smarties Book Prize for "Can't You Sleep, Little Bear?", and "Farmer Duck", the Emil/Kurt Maschler Award for "The Park in the Dark" and the Best Books for Babies Award for "Rosies Babies".

His other books include "The Big Big Sea", "Owl Babies", "Let's Go Home Little Bear", "John Joe and the Hen" and the "Little Dracula" books.

Helen Oxenbury won the Kate Greenaway Medal in 1979, and her books include "Animal Allsorts" and "Curious Creatures".

She has three times been Highly Commended for the Kate Greenaway Medal, and three times won the Smarties Book Prize, for "Farmer Duck, "We're Going on a Bear Hunt" and "So Much".