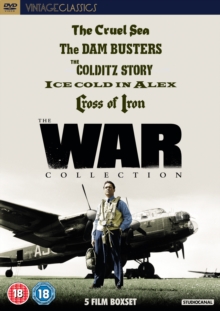 Collection of five classic war films. In 'The Cruel Sea' (1953) Lt. Commander Ericson (Jack Hawkins) has already lost one ship to an enemy attack when he is given command of the frigate Saltash Castle.

A subsequent confrontation in the North Atlantic tests Ericson's leadership to the limit once again, as he risks sacrificing the lives of his crew for the greater good. 'The Dam Busters' (1955) follows Dr Barnes Wallis (Michael Redgrave), whose invention of the 'Bouncing Bomb' is greeted with scepticism in the Second World War.

However, RAF Wing Commander Guy Gibson (Richard Todd) proves the bomb's worth in a daring mission to destroy the German Ruhr Dams. 'The Colditz Story' (1955) follows the experiences of Allied prisoners-of-war who were held in Colditz Castle.

These POWs were strictly monitored as they were a high risk category and had constantly tried to escape whichever prison they were previously placed in.

Despite being outnumbered by their guards, the prisoners of Colditz continued to strive to achieve their freedom.

Along the way they pick up a South African officer (Anthony Quayle), and more than once avoid capture and death while crossing the German lines.

However, as the South African officer begins to undermine their confidence, they gradually come to suspect him of being a German spy.

Finally, 'Cross of Iron' (1977) follows a doomed German platoon facing annihilation at the hands of the Russians in 1943.

Stransky is desperate to win an Iron Cross - a medal Steiner has already earned, but considers worthless - and so promotes the highly-recommended Steiner to sergeant.

During a siege, Stransky hides in his bunker, terrified of battle, only to later file a report claiming that he himself led a victorious counter-attack.

However, when Steiner disputes this Stransky takes measures to remove him.