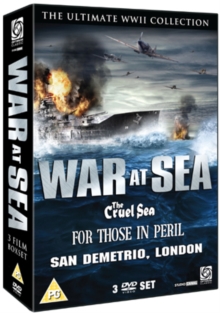 Triple bill of war dramas set at sea. In 'For Those in Peril' (1943), Pilot Officer Rawlings (Ralph Michael) is turned down by the RAF for air service on medical grounds and instead joins Air Sea Rescue, helping to pull downed Allied airmen out of the sea.

Rawlings is initially resentful of his new job, but gradually comes to appreciate its importance.

When the crew of a Boston bomber become stranded at sea in a dinghy, Rawlings and his colleagues become involved in a race against time - and the elements - to save their lives. 'San Demetrio, London' (1943), set in 1940 during the battle of the Atlantic, is based on a true story.

The crew of the petrol tanker San Demetrio are left with a near impossible task when she is torpedoed by the Germans.

The crew are forced to abandon ship in three lifeboats.

Two are picked up by other ships in the convoy, but the third drifts for days until its crew spies the burning San Demetrio on the horizon.

Do they board the ship, try to put out its fires and get it back to English shores or do they stay in the drifting lifeboat in the hope of being rescued?

Commander Ericson (Jack Hawkins) has already lost one ship to an enemy attack when he is given command of the frigate Saltash Castle.

A subsequent confrontation in the North Atlantic tests Ericson's leadership to the limit once again, as he risks sacrificing the lives of his crew for the greater good.