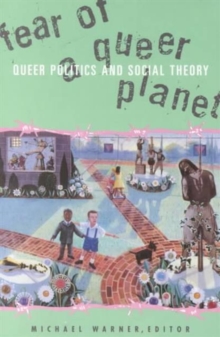 Fear of a queer planet : queer politics and social theory

Part of the Studies in Classical Philology series

In recent years, lesbians and gay men have developed a new, aggressive style of politics.

At the same time, innovative intellectual energies have made queer theory an explosive field of study.

In "Fear of a Queer Planet", Michael Warner draws on emerging new queer politics, and shows how queer activists have come to challenge basic assumptions about the social and political world.

Existing traditions of theory - Marxism, cultural studies, psychoanalysis, anthropology, legal theory, nationalism, and antinationalism - have too often presupposed a heterosexual society, as the essays in this volume demonstrate. "Fear of a Queer Planet" suggests a new agenda for social theory.

It moves beyond the idea that lesbians and gay men share a minority identity and special interests and that their issues can be subordinated to more general social conflicts.

Instead, Warner and the other contributors to this volume show that queer sexualities take many forms, are the subject of many kinds of conflict and struggles, and must be taken as a starting point in thinking about cultural politics.

This collection explores the impact of ACT UP, Queer Nation, multiculturalism, the new religious right, outing, queerness, postmodernism, and other shifts in the politics of sexuality.

The authors featured speak from different backgrounds of gender, race, nationality, and discipline.

Together, they show how struggles over sexuality have profound implications for progressive politics, social theory, and cultural studies.

Michael Warner has written extensively on censorship and the public sphere, the construction of American literary history, and the social and political implication of literary theories.

He is author of "The Letter of the Republic: Publication and the Public Sphere in Eighteenth-Century America" and co-editor of "The Origins of Literary Studies in America: A Documentary Anthology".