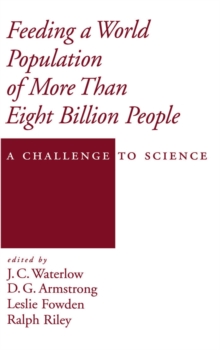 Feeding a world population of more than eight billion people: a challenge to science

Since the 1960s the steadily increasing availability of food, arising from the application of new agricultural science, has exceeded the demands created by the growth in size of the human population of the world.

Can the future demand for food be satisfied? This question is particularly difficult given that even in 1990 1.1 billion people in developing countries were living in povertyand more than 500 million in extreme poverty.

This book, based on the proceedings of the 10th International Symposium sponsored by the Nutrition Committee and the Trustees of the Rank Prize Funds, in 1996, addresses the question of how to feed the projected population a generation from now anddiscusses the challenges this presents.

The topics covered include land and crop nutrients and sustainability, natural resource management, water usage, applications of science to increase yield, the role of animal products in feeding people, and social aspects such as introducing new technology and the processes through which greater food security may be attained.

The contributors are world authorities in their fields, and the book will benefit a wide range of professional workers in theagricultural sciences and in government agencies.