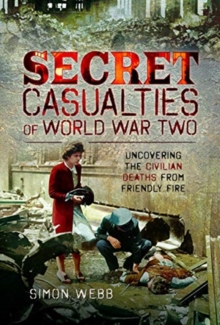 The London Blitz and the Japanese attack on Pearl Harbour are iconic myths for Britain and America.

Few in either nation realise, however, that these artfully constructed narratives of heroic resistance to aerial bombardment both conceal appalling massacres of their own citizens.

In Britain, thousands of civilians were killed when the army shelled London and other cities in an effort to prevent those living there from fleeing the German bombs.

At Pearl Harbour, American warships fired their heavy guns at the city of Honolulu, with devastating results. In this book, Simon Webb reveals one of the last secrets of the Second World War; the casualties which friendly fire' from heavy artillery inflicted upon British and American civilians.

In the case of the British, these deaths were part of a quite deliberate policy which was devised to ensure that those living in big cities remained there, despite the dangers of enemy bombing.

There were times during the German bombing of London when more people were being killed by British shells than were dying as a result of enemy bombs. Although this book traces the history of bombing and anti-aircraft guns from the Franco-Prussian War of 1870-1871, through to the First World War, its chief concern is with the events of the Second World War; particularly the Blitz.

Nobody reading The Secret Blitz will ever view Pearl Harbour or the Blitz in quite the same way again.