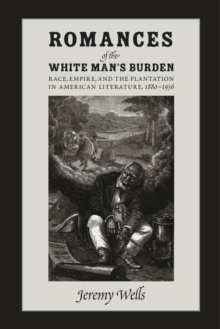 Romances of the white man's burden : race, empire, and the plantation in American literature, 1880-1936

"Take up the white man's burden!" So wrote the English writer Rudyard Kipling in 1899, in a poem aimed at Americans at a time when colonial ambitions were particularly high.

The poem proved especially popular among white southern men, who saw in its vision of America's imperial future an image that appeared to reflect and even redeem the South's plantation past. Romances of the White Man's Burden takes on works in American literature in which the proverbial "old plantation" is made to seem not a relic but a harbinger, a sign that the South had arrived at a multiracial modernity and harmony before the rest of the United States.

Grady, Thomas Dixon, and William Faulkner, Jeremy Wells reveals their shared fixation on the figure of the white southern man as specially burdened by history.

Each of these writers, in his own way, presented the plantation South as an emblem, not an aberration, of America.