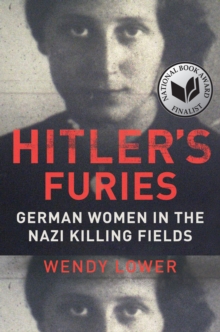 Houghton Mifflin Harcourt
0547863381 / 9780547863382
Hardback
08/10/2013
Usually dispatched within 4 weeks
United States
English
24 cm xi, 270 pages : illustrations (black and white), map (black and white)
Wendy Lowers stunning account of the role of German women on the World War II Nazi eastern front powerfully revises history, proving that we have ignored the reality of womens participation in the Holocaust, including as brutal killers. The long-held picture of German women holding down the home front during the war, as loyal wives and cheerleaders for the Fhrer, pales in comparison to Lowers incisive case for the massive complicity, and worse, of the 500,000 young German women she places, for the first time, directly in the killing fields of the expanding Reich.

Hitlers Furies builds a fascinating and convincing picture of a morally lost generation of young women, born into a defeated, tumultuous postWorld War I Germany, and then swept up in the nationalistic fervor of the Nazi movementa twisted political awakening that turned to genocide. These young womennurses, teachers, secretaries, wives, and mistressessaw the emerging Nazi empire as a kind of wild east of career and matrimonial opportunity, and yet could not have imagined what they would witness and do there. Lower, drawing on twenty years of archival and field work on the Holocaust, access to post-Soviet documents, and interviews with German witnesses, presents overwhelming evidence that these women were more than desk murderers or comforters of murderous German men: that they went on shopping sprees for Jewish-owned goods and also brutalized Jews in the ghettos of Poland, Ukraine, and Belarus; that they were present at killing-field picnics, not only providing refreshment but also taking their turn at the mass shooting. And Lower uncovers the stories, perhaps most horrific, of SS wives with children of their own, whose female brutality is as chilling as any in history.

Hitlers Furies will challenge our deepest beliefs: genocide is womens business too, and the evidence can be hidden for seventy years.