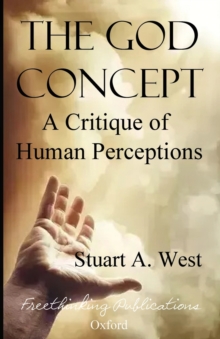 The God Concept : A Critique of Human Perceptions

By: West, Stuart A

The God Concept investigates concepts of the divine, tracing the origins of religious belief, its development through cultural evolution from polytheism to the rise of monotheism, and the emergence of Judaism, from which Christianity and Islam developed.

As ancient civilizations developed in the Middle East, Mesopotamia and Egypt emerged as centres of polytheism.

The Mesopotamian roots of the Abrahamic religions are demonstrated by comparison of the Babylonian creation epic with the Genesis account of creation.

In Egypt, the Amarna revolution with its religious reformation by Pharaoh Akhenaten, and its worship of the sun disc Aton, produced The Hymn to the Aton.

In both Babylon and Egypt there were monotheistic trends, foreshadowing the development of monotheism among the Israelites.

It is suggested that the emergence of Yahwism among the Israelites may have had its origins with rebelling Canaanites fleeing from Egyptian hegemony.

Eventually, when the final text of the Pentateuch was canonized after the Babylonian exile, the scene was set for the establishment of a theocracy.

The consequence was fundamentalism, which dominated religious life until publication of Charles Darwin's Origin of Species in 1859, after which attitudes changed.

Darwin, a non-believer, understood man as having evolved, rather than having been created ex nihilo by a supernatural being.

The power of evolution is considered, as is also the opposition by religious fundamentalists, and their legal challenges to it.

The impact of the Big Bang theory and how the universe evolved is discussed.

Can we conclude that the biblical creation account contradicts the known empirical facts? And what of the credibility of the God of the Bible?

Is God an enigma? Or is God a concept of the human mind?About the authorStuart West is a retired English Lawyer, who is now living in Israel.

Born in London in 1935, he was educated at the progressive King Alfred School, Hampstead, and University College London, where he obtained his law degree.

He subsequently qualified as a solicitor, and in1968 opened a private law practice in Brighton, Sussex.

Until 1976 he also engaged in Bible research, leading a Bible studies group.

In that year he sold his law practice, taking up the opportunity of a legal appointment with an international shipping company in Israel for six years in charge of marine claims.

In 1982 he returned to the UK and resumed private law practice in London, where he remained until his retirement in 2002.

During this period he continued with Bible research, writing several papers for an English language quarterly Bible magazine, published in Jerusalem.

On retiring, he and is wife returned to Israel where their three married daughters and their families were already all living. Since then he has broadened his research to probing the anthropological origins of religious belief.