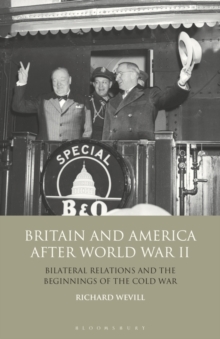 Britain and America after World War II : bilateral relations and the beginnings of the Cold War

The period immediately after World War II was a vital one for diplomatic relations and, with the Soviet Union emerging as a new superpower, it was particularly important for Britain's relations with America.

This is the first book to focus on the role of the British Embassy in Washington during this period.

According to Richard Wevill, the British Embassy was pivotal in the fulfilment of key British foreign, financial and imperial policy objectives. Applying the implications of new archival material to the turning points of the period, including a detailed review of Lord Halifax's ambassadorship under Attlee, a re-evaluation of the part of Roger Makins in the atomic energy discussions, and the Embassy's influence in relation to Palestine, Wevill argues for a more nuanced understanding of the 'special relationship' in its most formative period.

He offers a recasting of a crucial period of twentieth century history, providing fascinating new detail on Britain's relations with President Truman as well as with Secretaries of State George Marshall and Dean Acheson. Charting the beginnings of one of modern history's most influential alliances, this book will be a primary reference point for students and scholars of History, the Cold War, Politics and International Relations.