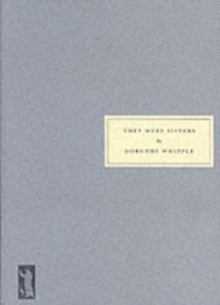 By: Whipple, Dorothy,  Brayfield, Celia(Afterword by)

The main theme of "They Were Sisters" (1943) is that three sisters' choice of husband dictates whether they have homes, and whether, in their homes, they will be allowed to flourish, be tamed or repressed.

We see three different choices and three different husbands: the best-friend, soul-mate husband of the one sister, who brings her great joy; the would-be companionable husband of another, who over-indulges and finally bores her; and, the bullying husband who turns a high-spirited, naive young girl into a deeply unhappy woman.

It is the last husband, Geoffrey, who is the most horrifying character in "They Were Sisters".

Man's cruelty to woman is a frequent theme in Dorothy Whipple's novels, but nowhere was there more scope for man to be cruel to his wife than in Britain before the reform of the divorce laws.As Celia Brayfield writes in her Persephone Preface: 'Coupled with their financial dependence, but largely taken for granted because it would have been a fact of life for Whipple's readers, is the bitter truth that the middle-class woman of this time had almost no chance of freeing herself from a bad husband. Even after the Matrimonial Causes Act of 1937 a divorced woman suffered grave social disadvantages'.

What has not changed is that some men are bullies and some women are married to them. 'Described as a woman who loves too much decades before those words became the title of a book about women drawn to dysfunctional partners, Charlotte marries Geoffrey, a boorish, hard-drinking salesman who swiftly evolves into a domestic dicator.

Yet his blood-curdling sadism towards his wife and children is evoked without any physical violence or the use of a word stronger than 'damn". "They Were Sisters" is a compulsively readable but often harrowing novel by one of Persephone's best writers.