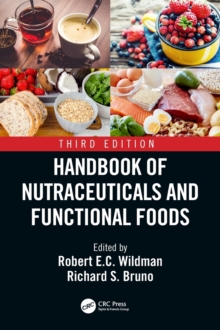 Handbook of nutraceuticals and functional foods

The field of functional foods along with their bioactive food components has grown tremendously over the past decades.

These advances have also driven efforts by the food and nutraceutical industries to establish and market health claims, formulate extra-value foods, and even generate new health foods for human benefit. Handbook of Nutraceuticals and Functional Foods, Third Edition, compiles the data from experts in the field that potentiates the already established credibility of the earlier editions.

In its three-section format, it provides an authoritative summary of the prophylactic and/or medicinal benefits of natural foods and their constituents that are linked to favorable health outcomes.

Beginning with an overview of the field and associated regulations, each chapter describes the chemical properties, bioactivities, dietary sources, and evidence of these health-promoting dietary constituents.

Features:* Summarizes plant- and animal-based functional foods and their bioactive components* New chapters on cannabidiol and scientific, legal, and regulatory considerations; green tea and nutraceutical applications; and herbal nutraceuticals and insulin resistance* Includes information on functional food beverages including coffee, green tea, and dairy milk* Discusses antioxidant and anti-inflammatory activities of vitamin E, anthocyanins and other (poly)phenolic compounds, and carotenoids * Provides an update on the health benefits and requirements of protein and performance and therapeutic application and safety of creatine.