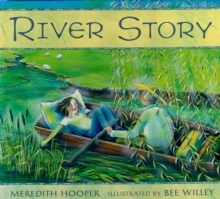 By: Hooper, Meredith,  Willey, Bee(Illustrated by)

A lyrical, beautifully illustrated account of a river's journey from its source to the sea - supports key stage 1-2 Geography. "All rivers have a beginning..." This lyrical account of a river's journey from the mountains to the sea, which won the English Association's Non-Fiction Award, is a perfect introduction to rivers and supports key stage 1-2 Geography.

The river begins as a clear stream formed high in the mountains from melted snow.

It slips over pebbles, skids round rocks and is fed by other streams, smaller and faster.

Gradually, the river grows wider as it flows quietly past meadows, under bridges, through cities ... until, finally, after sliding slowly through mudflats and marshes, fresh water meets salt water to become part of the sea.

Beautifully illustrated by Bee Willey, with a detailed spread at the end charting the key geographical stages of a river's journey.