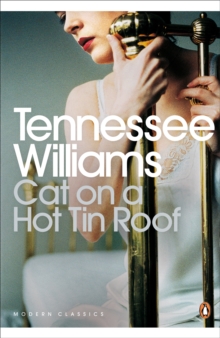 Cat on a hot tin roof

A sizzling drama of desire, avarice and deception set in the American Deep South, Tennessee Williams'sCat on a Hot Tin Roofis published in Penguin Modern Classics.

'Big Daddy' Pollitt, the richest cotton planter in the Mississippi Delta, is about to celebrate his sixty-fifth birthday. His two sons have returned home for the occasion: Gooper, his wife and children, Brick, an ageing football hero who has turned to drink, and his feisty wife Maggie. As the hot summer evening unfolds, the veneer of happy family life and Southern gentility gradually slips away as unpleasant truths emerge and greed, lies, jealousy and suppressed sexuality threaten to reach boiling point. Made into a film starring Elizabeth Taylor and Paul Newman,Cat on a Hot Tin Roofis a masterly portrayal of family tensions and individuals trapped in prisons of their own making.

Tennessee Williams (1911-1983) was born in Columbus, Mississippi. When his father, a travelling salesman, moved with his family to St Louis some years later, both he and his sister found it impossible to settle down to city life. He entered college during the Depression and left after a couple of years to take a clerical job in a shoe company. He stayed there for two years, spending the evenings writing. He received a Rockefeller Fellowship in 1940 for his playBattle of Angels, and he won the Pulitzer Prize in 1948 and 1955. Among his many other plays Penguin have publishedThe Glass Menagerie(1944),The Rose Tattoo(1951),Cat on a Hot Tin Roof(1955),Sweet Bird of Youth(1959),The Night of the Iguana(1961), andSmall Craft Warnings(1972).

If you enjoyedCat on a Hot Tin Roof, you might like Williams'sThe Glass Menagerie, also published in Penguin Modern Classics.

'Tennessee Williams will live as long as drama itself ... he is, quite simply, indispensable'
Peter Shaffer, author ofEquus