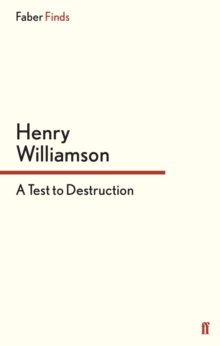 A test to destruction - 8

Part of the A Chronicle of Ancient Sunlight series

A Test to Destruction (1960) was the eighth entry in Henry Williamson's fifteen-volume A Chronicle of Ancient Sunlight spanning the years from the late Victorian period to the Second World War.

It begins in the final year of the Great War. After the harsh winter of 1917 everyone is nearing the limits of their endurance.

Hetty, temporarily relieved to have Phillip safely home, hopes desperately that her son will not be posted to France again.

Phillip, however, is determined to go back, and adds his name to a list of those available for service.

After returning to the Front, however, he is injured and sent on convalescent leave in the West Country, where his post-war civilian life begins.'Williamson's style is romantic, though rarely sentimental, and his sensuous response to nature is fresh and surprising.' Anthony Burgess, Ninety-Nine Novels: The Best in English since 1939