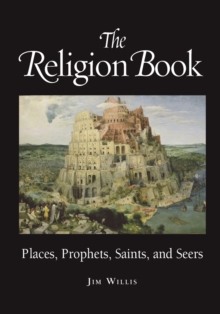 From Aaron (the first high priest of Israel) to Zoroastrianism (once the dominant religion in Persia), The Religion Book provides an encyclopaedic look at the practices of yesterday and today.

Christians, Buddhists, Wiccans and the rest may have questions about others' belief or even their own, and The Religion Book expertly explains the similarities, differences, and original ideologies of believers and skeptics around the world.

Are Nirvana and Heaven the same? Who are the Raelians, and why are they cloning people?

What's the difference between Christian Scientists and Jehovah's Witnesses?

Dogma? Karma? Feng-Shui? What do they all mean? Devils, ghosts, the afterlife -- do they really exist?

If killing's a sin, why are there jihads? From the prominence of Catholics to the head scratching of the Red Paint People, The Religion Book is the go-to resource for all ages -- and it doesn't require dressing in go-to-meeting clothes.

The Religion Book: Places, Prophets, Saints, and Seers is a reader's convenient parchment pulpit of easy understanding to some of the most asked-about religious topics. Five hundred-plus pages explore 300 key religious figures, prophets, deities, places, and scriptures that play important roles in the major religions of the world.

Willis respectfully explains terms and concepts as they relate to their respective belief systems, whether mainstream, pagan, or cultish.