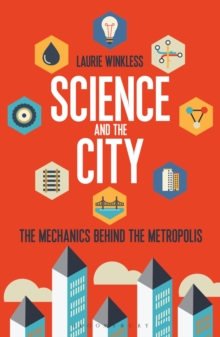 Science and the city : the mechanics behind the metropolis

Cities are a big deal. More people now live in them than don't, and with a growing world population, the urban jungle is only going to get busier in the coming decades.

But how often do we stop to think about what makes our cities work?

Cities are built using some of the most creative and revolutionary science and engineering ideas - from steel structures that scrape the sky to glass cables that help us communicate at the speed of light - but most of us are too busy to notice.

Science and the City is your guidebook to that hidden world, helping you to uncover some of the remarkable technologies that keep the world's great metropolises moving.

Laurie Winkless takes us around cities in six continents to find out how they're dealing with the challenges of feeding, housing, powering and connecting more people than ever before.

In this book, you'll meet urban pioneers from history, along with today's experts in everything from roads to time, and you will uncover the vital role science has played in shaping the city around you.

But more than that, by exploring cutting-edge research from labs across the world, you'll build your own vision of the megacity of tomorrow, based on science fact rather than science fiction. Science and the City is the perfect read for anyone curious about the world they live in.