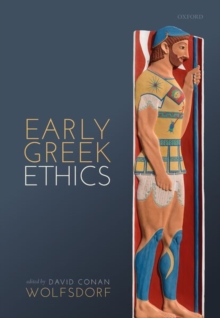 Early Greek Ethics is devoted to Greek philosophical ethics in its formative period, from the last decades of the sixth century BCE to the beginning of the fourth century BCE.

It begins with the inception of Greek philosophical ethics and ends immediately before the composition of Plato's and Aristotle's mature ethical works Republic and Nicomachean Ethics.

The ancient contributors include Presocratics such as Heraclitus, Democritus, andfigures of the early Pythagorean tradition such as Empedocles and Archytas of Tarentum, who have previously been studied principally for their metaphysical, cosmological, and natural philosophical ideas.

Socrates and his lesser known associates such as Antisthenes of Athens and Aristippus of Cyrene also feature, as well assophists such as Gorgias of Leontini, Antiphon of Athens, and Prodicus of Ceos, and anonymous texts such as the Pythagorean Acusmata, Dissoi Logoi, Anonymus Iamblichi, and On Law and Justice.

In addition to chapters on these individuals and texts, the volume explores select fields and topics especially influential to ethical philosophical thought in the formative period and later, such as early Greek medicine, music, friendship, justice and the afterlife, and early Greek ethnography.

Consisting of thirty chapters composed by an international team of leading philosophers and classicists, Early Greek Ethics is the first volume in any language devoted to philosophical ethicsin the formative period.