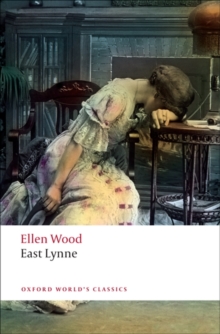 By: Wood, Ellen,  Jay, Elisabeth (Professor of English and Assistant Dean, Faculty of Arts and Humanities, Oxford Brookes University)(Edited by)

'Coward! Sneak! May good men shun him, from henceforth! may his Queen refuse to receive him! You, an earl's daughter! Oh, Isabel! How utterly you have lost yourself!'When the aristocratic Lady Isabel abandons her husband and children for her wicked seducer, more is at stake than moral retribution.

Ellen Wood played upon the anxieties of the Victorian middle classes who feared a breakdown of the social order as divorce became more readily available and promiscuity threatened the sanctity of the family.

In her novel the simple act of hiring a governess raises the spectres of murder, disguise, and adultery. Her sensation novel was devoured by readers from thePrince of Wales to Joseph Conrad and continued to fascinate theatre-goers and cinema audiences well into the next century. This edition returns for the first time to the racy, slang-ridden narrative of the first edition, rather than the subsequent stylistically 'improved' versions hitherto reproduced by modern editors.