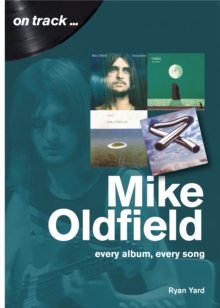 Mike Oldfield : every album, every song

Part of the On Track series

"It can be difficult for an artist to have such overwhelming success so early into their career as was the case for Mike Oldfield.

To this day, his name is forever synonymous with the album Tubular Bells.

Mike followed this album with three further long form works in the 1970s, before venturing off onto other musical paths.

The 1980s saw further success both in the albums and singles charts, while recent years have seen a return to long form music, often via sequels to his most famous work, with his most recent album being Return To Ommadawn in 2017. The music of Mike Oldfield touches listeners in ways that can be hard to describe.

It bridges the gap between many musical cultures, whilst staying sharp and alert to current technological trends.

In this book, Ryan Yard looks at the entire catalogue of albums to uncover what it is that makes his music so special.

Each track from every album is critiqued with the aim of offering long term fans a different perspective whilst enticing new fans to explore and familiarise themselves with such wonderful new music.

It makes a wonderful companion as the listener absorbs the music, hopefully offering food for thought as they embark on, or continue, their journey through the music of this remarkable artist.